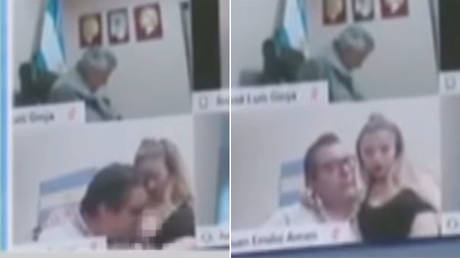 In perhaps one of the most high-stakes Zoom mishaps of the pandemic, Argentinian MP Juan Emilio Ameri decided to suck on a woman’s breast amid a virtual parliamentary session, which resulted in his suspension and resignation.

During Thursday’s budget talks the father-of-three legislator first put a young woman on his lap, then pulled her top off and proceeded to touch her breast with his mouth. Ameri was suspended immediately after the scene played out for both his fellow MPs and the viewers at home.

The president of the lower house said that the case was something “over the rules,” while recalling other examples of unusual behavior during the online meetings – when, for example, one MP fell asleep.

Ameri tried to jokingly play off the incident, referring to the woman’s supposed recent breast augmentation, but later decided to resign of his own volition the same day.

During a radio interview, Ameri said that the case “is hurting personally” both him and his partner, as well as the former MP’s relatives and friends.

He apologized for the lewd mishap and explained that he miscalculated the poor quality of his internet connection, thinking that his camera feed must have been off. “I asked her if I could give her a kiss and I kissed her on the boobs. That was it.”

Ameri’s behavior has been widely condemned by his former colleagues, who say they feel “deep shame” for the scene. At the same time, the incident brought to light past sexual harassment accusations against him.

Workplace stories of the so called ‘Zoom fails,’ where users forget about the camera filming them, have almost become a news genre on their own, due to new incidents seemingly occurring almost every day amid the work-from-home conditions of the coronavirus pandemic.

One such case famously happened back in August, when a Philippines government official lost his job after being caught having sex with his secretary during an online conference call.

British PM Johnson to win a majority of 86: Exit poll