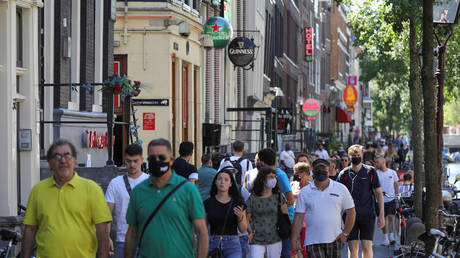 Bars, restaurants and cafes in the Netherlands will close their doors as the Dutch government tries to control the spread of Covid-19. Unlike many of its European neighbors, the Netherlands has thus far avoided harsh lockdowns.

Prime Minister Mark Rutte announced the “partial lockdown” on Tuesday evening, after health officials in the Netherlands reported a record 7,393 new cases of Covid-19 that day. A total of 43,903 new infections were recorded in the preceding week, along with 150 deaths.

The new measures, which come into effect on Wednesday, will see all bars, restaurants and cafes close, and the sale of alcohol banned after 8pm. In addition, the wearing of face masks will be mandatory in all indoor spaces.

Rutte’s government has held off on some of the harsher lockdown measures imposed in other European countries since the pandemic began. Masks were only mandatory on public transport, and bars and hospitality venues operated as usual – albeit with some social distancing measures, and contact tracing forms given to customers.

These rules tightened somewhat late last month, with restaurants and bars in Amsterdam, Rotterdam and The Hague ordered to close by 10pm, and workers in these cities advised to do their jobs remotely if possible.

“It hurts, but it’s the only way,” Rutte said of the new restrictions on Tuesday. “We have to be stricter.”

The Netherlands has so far recorded nearly 190,000 cases of Covid-19, and more than 6,600 deaths, according to a tally by Johns Hopkins University.