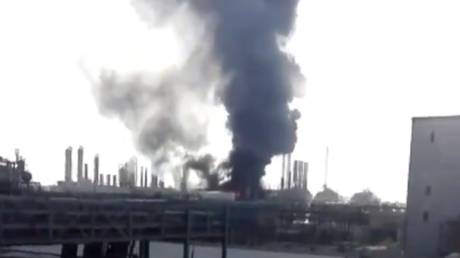 An explosion caused a blaze at a petrochemicals plant in southwestern Iran on Friday, according to state media. The country has been plagued by accidents at industrial facilities in recent months.

The fire broke out at the aromatics unit of a petrochemical plant in the port city of Bandar Mahshahr, state broadcaster IRIB reported.

Firefighters from the plant as well as regional fire teams were called to the site and managed to contain the blaze. There were no fatalities or injuries as a result of the incident, it added.

Social media users have been sharing footage, purportedly taken at the plant, showing a huge plume of thick black smoke pouring out from it.

Several blasts and fires have been reported at various facilities across Iran in recent months, causing a number of fatalities as well as extensive destruction.

Earlier this month, a worker died in an explosion an industrial area in central Isfahan province.

Also on rt.com
At least 3 killed as gas explosion flattens building near marketplace in Iran

In July, a major blast rocked Iran’s largest uranium enrichment facility in the city of Natanz. However, the authorities said there were no casualties or leaks of radioactive materials. Several days before that, 19 people were killed in an explosion at a medical facility in the capital Tehran.