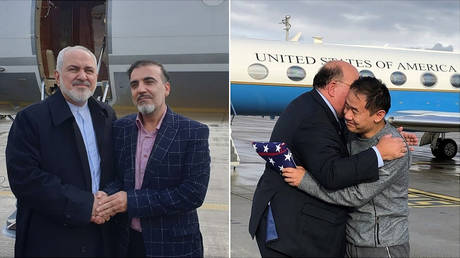 Tehran is open to exchanging more prisoners with the US, but it is now time for Washington to make a move on it, Foreign Minister Mohammad Javad Zarif said, after a recent swap left more room for optimism.

“After getting our hostage back this week, fully ready for comprehensive prisoner exchange,” Zarif tweeted on Monday.

The ball is in the US’ court.

His words came after a two-person Swiss-brokered prisoner swap with Washington concluded over the weekend. Tehran released a Persian history scholar Xiyue Wang, a naturalized American national who was sentenced to 10 years in prison in 2017 over espionage charges.

After getting our hostage back this week, fully ready for comprehensive prisoner exchange. The ball is in the US’ court.Today, back to regional diplomacy in Istanbul, at the Ministerial Heart of Asia mtg, joining forces for peace & development in Afghanistan.#NeighborsFirstpic.twitter.com/dJw05JYM7X

The US, in return, freed Iranian stem-cell researcher Massoud Soleimani who was held after being accused of violating trade sanctions by trying to “smuggle” vials of proteins into Iran.

The successful exchange provided an extremely rare example of a goodwill gesture between the Washington and Tehran, which have been locked in a tense diplomatic conflict since US President Donald Trump had abandoned the 2015 agreement on the Iranian nuclear program last year and re-imposed sanctions on Iran. The swap was met with optimism from both sides, offering some hope that a similar transaction may happen in the future.

Also on rt.com
‘We can make a deal together’: Trump thanks Iran for ‘very fair negotiation’ that led to prisoner swap

Zarif has floated the idea of a larger prisoner exchange in the past. In October, he told reporters that he gave the US officials a list of the names of people Iran would like to see freed. Trump’s National Security Advisor, Robert O’Brien, meanwhile, told NPR that the recent swap serves as a good sign for the release of Americans held by Iran.

Hertz: Virus-hit Hertz declares bankruptcy in US and Canada