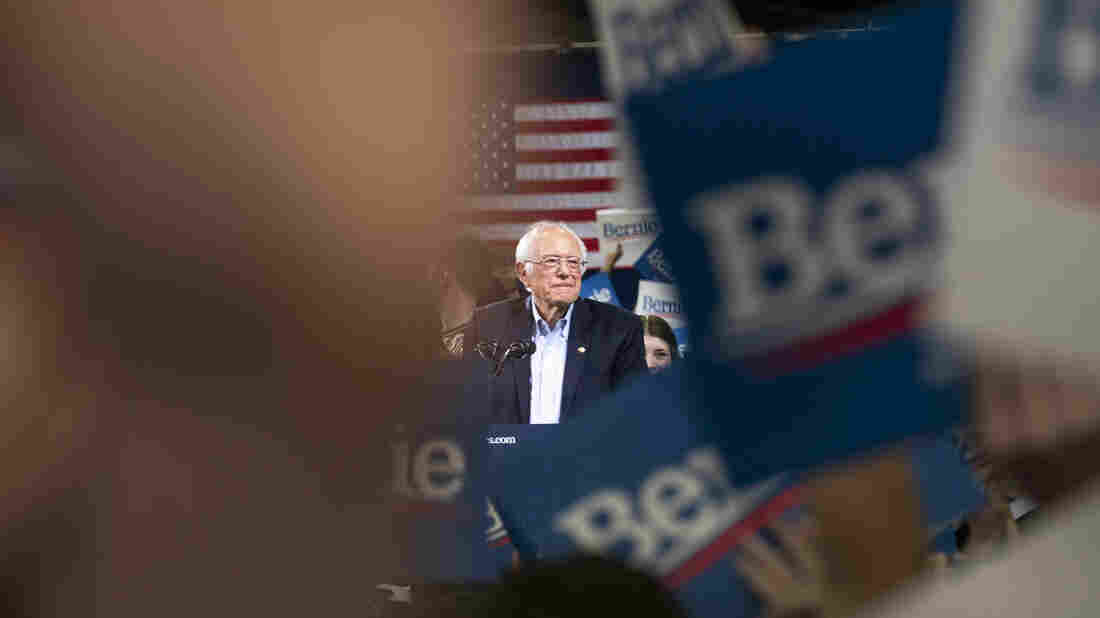 Sen. Bernie Sanders pauses while speaking during a primary night rally in Essex Junction, Vt., on Tuesday. Sanders has gotten more positive support from Russian media than any other Democratic candidate. 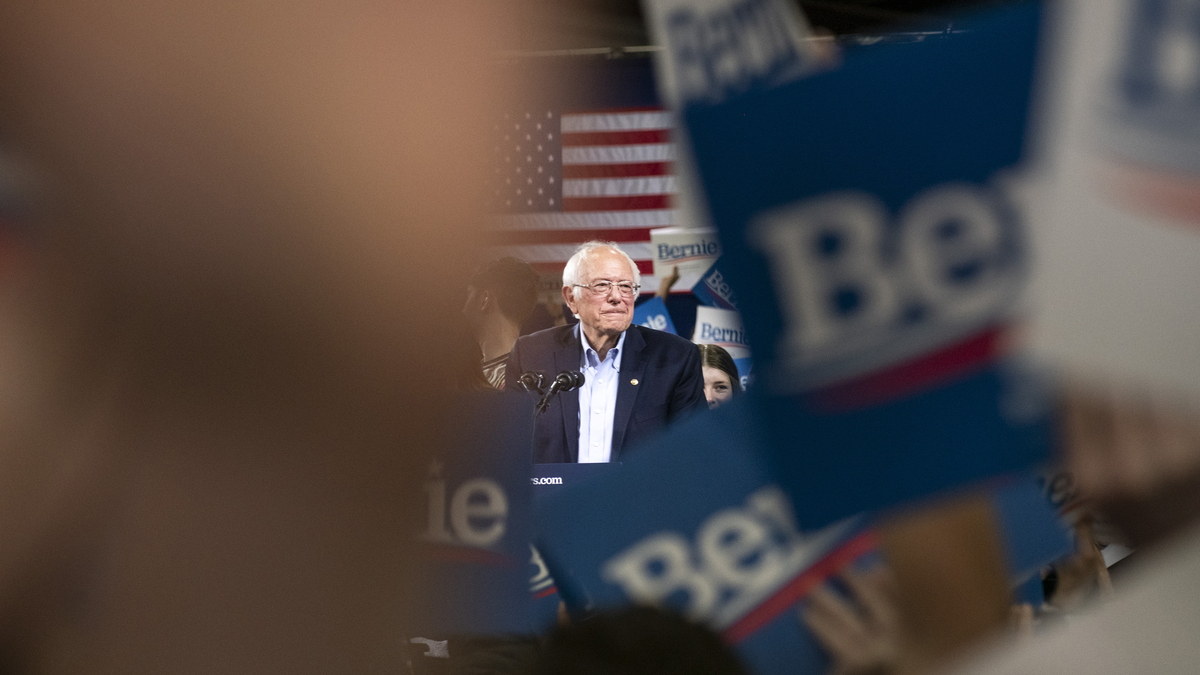 Sen. Bernie Sanders pauses while speaking during a primary night rally in Essex Junction, Vt., on Tuesday. Sanders has gotten more positive support from Russian media than any other Democratic candidate.

It’s 2016 all over again — at least from Russia’s perspective.

But over the past six weeks, this coverage has shifted to mirror pro-Sanders talking points first used in the last presidential campaign, said Clint Watts of the Foreign Policy Research Institute, who has been monitoring Russian interference continuously.

“What’s really come on strong just in the last 30 to 45 days are very similar narratives that we saw in 2016 about Sanders,” Watts told NPR.

While Sanders has acknowledged on the campaign trail that he was briefed by the intelligence community about Russia’s efforts to boost his campaign, he has been steadfastly opposed to that support, saying at a recent debate: “Hey, Mr. Putin, if I’m president of the United States, trust me, you’re not going to interfere in any more American elections.”

It isn’t clear precisely how much Russia is doing to help Sanders via the anonymity of cyberspace, but national security officials warned on Monday that social media agitation and disinformation have continued through this year’s presidential race.

A statement signed by top Trump administration officials stressed that foreign actors were spreading “false information and propaganda about political processes and candidates on social media in hopes to cause confusion and create doubt in our system.”

That includes an ever-changing number of candidates and topics based on Russian strategic goals, including reportedly the reelection of President Trump.

Following the 2016 presidential election, the intelligence community devoted a substantial portion of its assessment on Russian meddling to RT’s efforts to influence politics and fuel divisions in the United States.

While monitoring coverage on Russian news agencies RT and Sputnik, Watts has noticed an ongoing trend: While most coverage remains neutral, Sanders receives substantially better coverage than his opponents.

According to figures released by Watts’ organization, Sanders received a higher percentage of positive coverage — more than 2 1/2 times — than any other Democratic candidate, and even more than President Trump.

And, Watts adds, “the important part is that they [the two networks] have been more negative about everyone else.”

Jessica Brandt, head of research and policy for the Alliance for Securing Democracy, has monitored Russian government messaging to examine their narratives about Sanders.

“Those [narratives] tend to be that the corporate media and the Democratic establishment, the DNC and elites, are rigging the system against him and endeavoring to deny him a win,” Brandt said.

The Mueller investigation found that the Internet Research Agency, a Kremlin-linked “troll farm” based in St. Petersburg, had tried to boost Sanders over then-candidate Hillary Clinton in 2016.

“One of the things I think Russia looks at when they see Bernie is that he’s someone who’s talking about a rigged system. He’s talking about the elite aren’t with you,” said Mieke Eoyang, vice president of the National Security Program at Third Way, a center-left think tank that opposes a Sanders candidacy.

Another way to gauge the nature of Russia’s support for Sanders is by examining inauthentic social media accounts that have been taken down for having ties to foreign influence operations.

For example, in October Facebook announced that it had suspended dozens of Instagram accounts originating in Russia but targeted at an American audience, with apparent links to the Internet Research Agency.

Facebook shared its data with Graphika, a social media analytics firm, which said that four of the suspended accounts had a focus on praising Sanders. 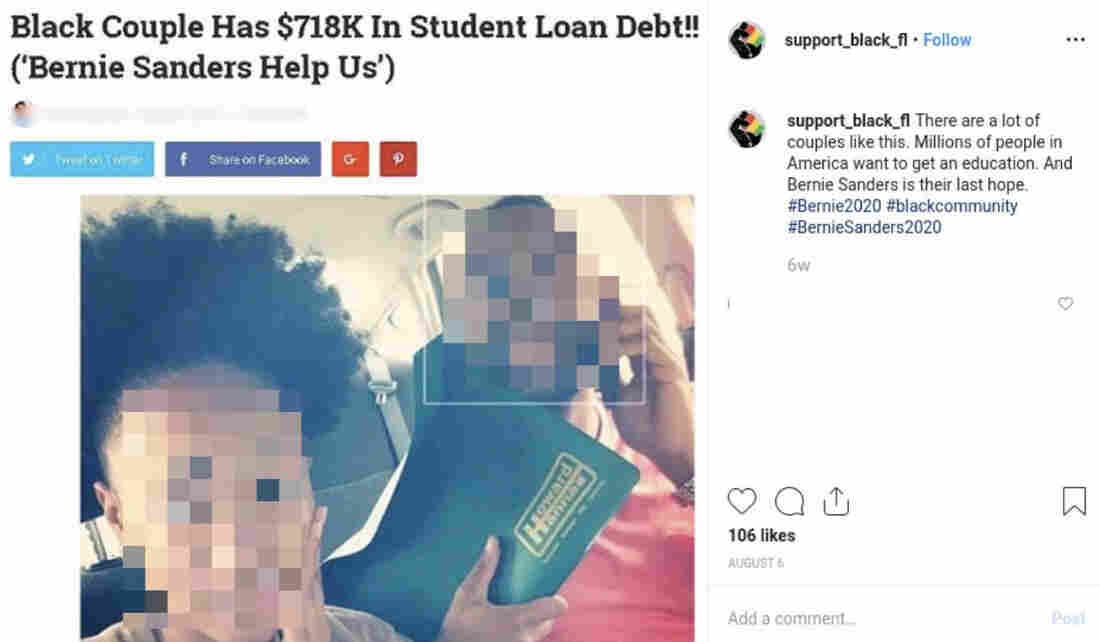 A 2019 report from the social media analytics firm Graphika showed screenshots of suspended Instagram accounts. One, which praised Sanders, reads: “Millions of people in America want to get an education. And Bernie Sanders is their last hope.”

He was the only candidate on the Democratic side who was a focus of these fake accounts, according to a Graphika report. And in some cases, these accounts plagiarized memes and comments directly from the Sanders campaign.

One post read: “Millions of people in America want to get an education. And Bernie Sanders is their last hope.”

The Sanders campaign contends that Russia is trying to do its best to sow discord in the race — not elect Bernie Sanders.

And campaign co-chair Rep. Ro Khanna argues that the senator has been a fervent advocate of solutions to foreign interference.