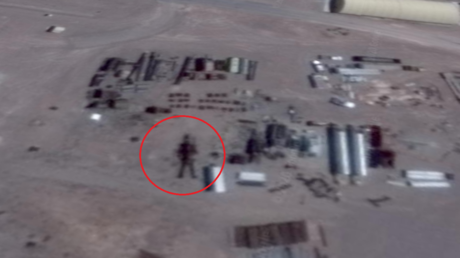 A self-proclaimed alien hunting expert believes he has discovered a 16-meter tall alien robot hiding out in extraterrestrial enthusiasts’ Mecca, the mysterious Area 51.

Scott C Waring of ET Data Base spotted the “robot” while trawling through Google Earth satellite images of the highly-classified United States Air Force base in Nevada. The eagle-eyed Waring spotted the curious shape nestled amongst various buildings at the facility.

The humanoid characteristics of the black shape led the self-styled ufologist to ponder if he had found proof of a robot built by aliens. The peculiar pattern can be seen by entering exact coordinates (37°13’26.26″N 115°49’2.37”W) in the Google Earth platform.

“I found a 16 meter dark figure in Area 51 and there seems to be another to the right of it, but shorter,” Waring said on his UFO Sightings Daily blog. “When I checked through the past photos of that location, I notice that the figure actually moves onto its side, then changes its poses in each photo. It actually moves,” he added.

The avid alien hunter speculates that the apparent anomaly could be the result of an Air Force operative “playing around for years” or even that the US Air Force is experimenting with 16-meter tall robots that could be used for combat missions.

While those are fascinating theories, a more straightforward explanation is that the “robot” is simply a building or even a mere shadow.

Waring has made a plethora of other “discoveries” using Google Earth and a range of other sources, including NASA images captured on Mars. Despite his fascinating narratives, experts say these alien “sightings” can usually be explained by a trick of the mind known as pareidolia. This is the tendency for humans to see recognizable shapes or patterns where they do not exist.

Even though Waring’s explanation for the “robot” is unlikely in the extreme, the images he shared from Area 51 highlight why the military compound has been the source of so many conspiracy theories over the years. The photos show a range of interesting structures, machinery and even a baseball field at the mysterious military facility.